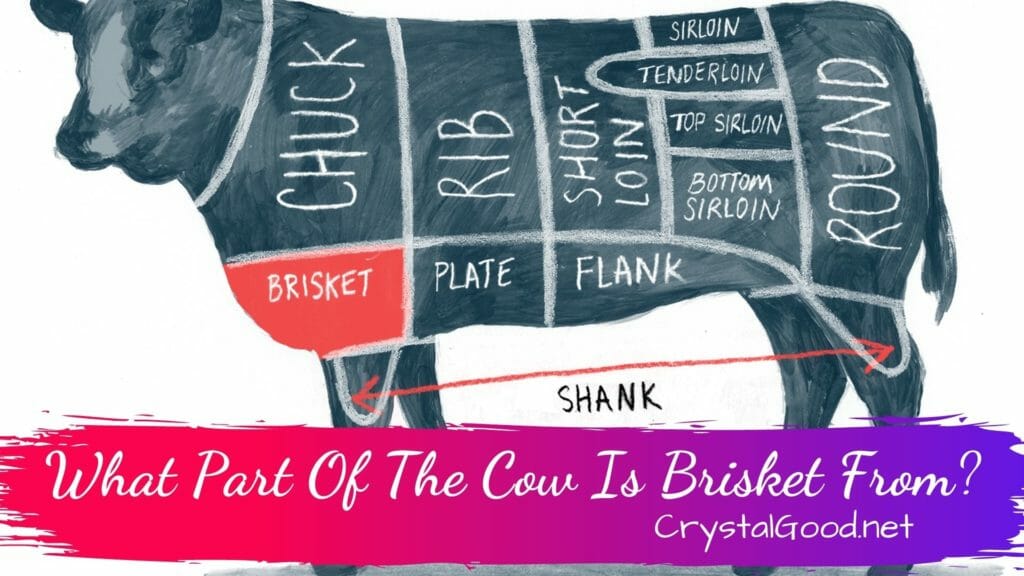 If you’re a fan of barbeque, then you’ve probably had brisket before. But what part of the cow does brisket come from? And how is it prepared? In this blog post, we’ll answer those questions and more. So, whether you’re a BBQ novice or an expert, read on to learn everything you need to know about brisket.

What are the different types of brisket?

Several types of brisket are available. There are two basic types of beef brisket: flat and point. They have different properties, though both are similar in taste. Whether you choose to cook a point or flat brisket, keep in mind that you will need to use a slow and low heat to tenderize the meat.

Point is a richly marbled fatty section of the brisket. It has a buttery texture when shredded. It is usually cooked with dry rub. It is a larger cut than flat and is usually sold in packages labeled “brisket.”

The flat is a leaner portion of the brisket. It is usually 1-2 inches thick. It is a little less expensive than point. It can be found in packages labeled “brisket” and weigh between five and ten pounds.

The fat cap on the second cut helps keep the brisket moist while cooking. It will also contribute to some of the weight.

Both types of brisket are available at butchers and supermarkets. You can also order it at a restaurant. It is the main cut for corned beef, pastrami, and Jewish pot roast. It is also a popular cut for Asian dishes such as noodle soup.

Where can I buy beef brisket?

Buying beef brisket can be difficult. You need to know where to buy a good quality brisket and where to get the best deal.

The best place to find a good brisket is at a butcher. Butchers tend to carry high quality meat and are a better option than big box stores. They are also a good place to ask questions.

Another place to shop is online. Many stores have regular meat sales. You may be able to find a good deal on beef brisket from online stores.

Amazon Fresh is another good option. You can find many types of meat at Amazon Fresh. The prices may be a bit higher than at other stores, but you can also get free delivery on orders over $50.

The Sprouts Farmers Market is another place to shop for beef brisket. Its prices may be a bit higher than other stores, but its quality is high. They also have a lot of organic and healthy foods.

If you’re looking for a more upscale experience, you may want to try out Snake River Farms. They source their meat domestically. They have a selection of beef brisket and other American-raised meats.

How do you slice brisket?

Using a sharp knife, you should be able to slice the brisket. However, slicing it correctly is important to prevent a disaster. In addition, it helps the meat to cook evenly. It also keeps the outside of the brisket crispy.

One of the most important things to know is that the best way to cut a brisket is based on its orientation. Each part of the meat has different muscle fiber directions. In order to cut brisket in the proper manner, you must first separate the meat into two distinct sections, the point and the flat.

A sharp knife is necessary for slicing brisket, as well as a cutting board large enough to accommodate the brisket. Make sure that the board is flat before you start. It helps to have a nice clean working surface. Keeping your work area clean will help you to focus on slicing.

What is the best way to cook brisket?

Whether you are cooking a brisket for the first time or you are a seasoned pro, there are a few tricks to get it right. The secret to a tender, juicy brisket is low and slow.

The best way to cook a brisket is in a high-sided pan with a cover. This will help to ensure even cooking and caramelization.

If the brisket is not tender, then you may want to pull it out and reheat it. This will allow the juices to re-distribute to the meat.

Another way to test the temperature of your brisket is to use the “feel” method. Use a small fork to twist it in and out. If you can’t pass the fork through the meat, it is probably overcooked.

It’s important to use a pan that is at least a quarter inch thick. This will help to keep the brisket moist throughout the long cooking process.

Can you freeze beef brisket?

Using a freezer to freeze beef brisket can be an efficient way to freeze your meat, but it can also result in a loss in meat quality. It’s important to freeze the brisket correctly, as freezer burn can cause your meat to dry out.

If you want to freeze your brisket, it’s best to wrap it up in airtight packaging. This will keep it from getting freezer burn and will also ensure that it stays super moist.

If you’re planning on freezing the brisket, it’s best if you wrap it in a double layer of foil and cover it with a piece of cling film or aluminum foil. Make sure to seal the foil tightly so that there are no air bubbles.

You can freeze your brisket whole, or you can slice it. The slices freeze faster, so they take up less space in the freezer. When you’re ready to eat, remove the slices from the freezer and cook them. If you’re using a smoker, you can cook your brisket by placing it in a smoker with a 225 degree temperature.

How do you cook beef brisket?

Unlike other cuts of beef, brisket holds its shape when slow cooked. This makes it a great option for sandwiches and sliders. It also makes for a rich, hearty meal.

You can cook beef brisket in an oven or a slow cooker. It’s best to cook it slowly so that it’s moist and tender.

A meat thermometer is a good tool to help ensure that your brisket cooks to the right temperature. You should also cover the beef with foil so it stays moist. You can cook the brisket for up to eight hours, but be sure to remove it from the oven when the temperature reaches 180 degrees. You should also let it rest for at least 20 minutes before slicing it.

Another good way to cook beef brisket is to do a slow roast. The meat will keep its shape and texture after hours of slow cooking. You can also freeze a leftover brisket for up to three months.

It’s also a good idea to serve your brisket with mashed potatoes. The fat will drip onto the potatoes and provide a delicious dipping sauce.

Difference between brisket and chuck roast:

Compared to chuck roast, beef brisket is a tougher cut of meat. Its fat content is higher, and its flavor is more robust. However, it also requires more time to cook to become tender.

It is also expensive. A whole brisket can cost up to twice as much as a chuck roast. If you want to feed a group, a brisket is the better choice. You can also buy a smoked brisket for better leftovers.

Both cuts have their place in the kitchen. While chuck roast is often used in pot roasts, brisket is great for stews. They can be served in a variety of ways, including with BBQ coleslaw and BBQ baked beans.

Usually, a brisket is cut from the lower chest region of the cow. It is an excellent cut of beef, and can be cooked in many ways. The brisket is rich in flavor and fat. It is best cooked low and slow for best flavor.

Brisket is a tough meat. It can be hard to chew, but it also has a rich flavor. The meat is also very juicy. It can be cooked with a variety of techniques, including grilling and smoking. It is often paired with other meats, such as chuck, to create a delicious ground beef dish.

The connective tissue in brisket contains collagen fibers and elastin. These proteins help keep the meat strong and elastic. The brisket is also covered in a thin layer of fat that keeps it moist. The meat is rich in flavor and is a popular barbecue dish.

Brisket is a tough but juicy and flavorrich cut of beef that comes from the lower chest region of the cow. It’s packed with protein, making it a great option for grilling or smoking. When paired with other meats, brisket creates a delicious ground beef dish. If you’re looking for something new to try at your next barbecue, give brisket a shot – you won’t be disappointed!

PrevPreviousHow Much Water For 2 And 3 Cups Of Rice?
NextCan You Freeze Coleslaw?Next